Let’s Sew by Ursula Michael’s. This was such a fun stitch! The frame was found at Goodwill. Stitched on 14 count black aida (dear lord… UGH). You can read more about this one HERE. Started November 6, 2016 and finished November 24, 2016. 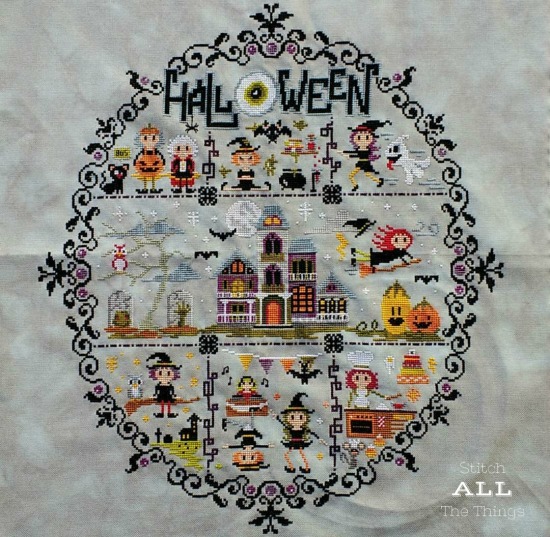 Whacky Witches in Stitches by Clouds Factory. I started this in July of 2014 and took a two year break between September 2014 and September 2016. Stitched 2 over 2 on 32 count evenweave in Charcoal (with Sparkles) from Dovestitch. Finished on October 26, 2016. I hand washed this in preparation for framing and the Weeks Dye Works thread in Mulberry ran all over it. I had to soak it for 24 hours with a color catcher, which removed quite a bit of the dye. My white thread is no longer as white as it was, and the Mulberry color has really faded. I have set this aside to rip out the Mulberry floss and restitch it at a later date. “Colorfast” my ass.

Halloween Town by The Frosted Pumpkin Stitchery. Started June 23, 2014. Two year break from September 2014 until September 2016. I made a major modification to the third clue. It was charted as a bakery, but that did not fit my vision of what should be in a Halloween Town. I changed it into a cemetery. Stitched on 14 count oatmeal aida. Finished September 28, 2016. 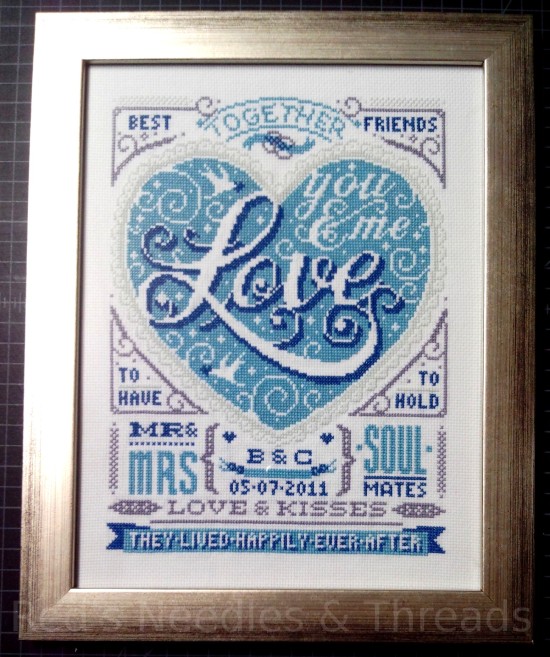 Stitchrovia “Love Heart” I saw this pattern in an issue of Cross Stitcher and knew it was the perfect gift to stitch up for Mister for our third anniversary.  It was my very first cross stitching project.  You can read more about it HERE.

Quilty Stitches. I decided to participate in Little Miss Shabby’s Quilty Stitches while we were on summer vacation.  Loved creating this.  I would have done things a bit differently in retrospect (more white), but I’m still satisfied with the way it turned out. Now I just need to make a sewing machine cover with it! Finished August, 21, 2014.